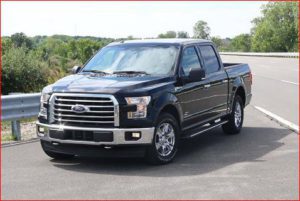 Are You Looking for The Most Cost Efficient Repair Option?

Not sure what is the best path to take to replace your existing original OEM differential?

Have you considered a Used Ford F150 Differential?

If you own a Ford F150, a genuine, Original Equipment Manufacture (OEM) Ford differential is usually the best choice in restoring your Ford F150 to its original factory specification. There are generally two ways to achieve this.

The first way, if the part is still available, is to purchase a brand new genuine OEM Ford F150 differential directly from the Ford parts department. If you are not too concerned with price, this is an excellent choice. You will have a brand new OEM Ford F150 part, with the performance, and reliability that Ford originally designed into the differential. The only downside to this approach is cost and availability! 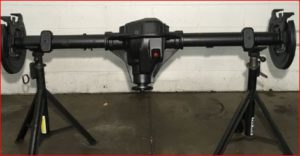 Depending on the age of your Ford F150, the differential may…or may not be available directly from Ford. If available, it will be a very expensive part! New Ford OEM differentials can run into the thousands, depending on which Ford model you own. Often, a new OEM Ford differential, directly from the Ford parts department is no longer available.

The second option for your Ford F150 is a USED OEM

You may be asking yourself, what kind of quality and reliability can you expect out of a used differential? Every year, all over North America, there are Ford trucks of your model type that are being totaled in accidents. Many of these vehicles are totaled very early in their lives. There are used OEM Ford differentials available with mileage anywhere from less than 10,000 miles to over 200,000 miles… and everything in between. 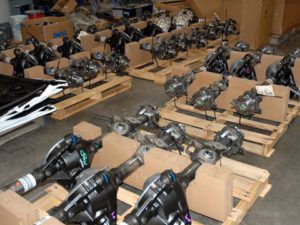 Once these Ford vehicles are totaled…they are disassembled into their individual parts. The parts are then labeled with the appropriate make, model, year, and VIN number. From there, they are warehoused until they are purchased by a Ford owner, or repair shop who is in need of this particular differential.

How We Do Business

Our customer service representatives are available Monday through Friday from 9:00AM until 8:00PM. On Saturday’s we are here 9:00AM until 5:00PM. Our customer service representatives do not try and sell you anything! All we do is provide you with an accurate quote on what is available…how much will it cost to have it delivered to you or your mechanic’s location…and when you should expect delivery!

In order for our team to provide you with an accurate Ford F150 differential quote we will need the following:

VIN Number (The VIN # is critical in order to ensure we send you the correct part the first time.)

Our team will make the purchase process Easy…No Stress…and Transparent!

Or fill out our form with you and your vehicles information…and one of our Customer Service Representatives will contact you back with a Free accurate quote.